EXHIBITOR REGITRATION IS NOW CLOSED. Please email Liza Posas at posas@usc.edu to be put on the waiting list.

All Day. All in one Place.

Come and celebrate the diversity of stories that make Southern California such a place of discovery. At the Los Angeles Archives Bazaar, presented by L.A. as Subject and the USC Libraries, anyone with an interest in the region’s history will find something of value. A broad array of institutions and archives will have experts on hand to show off their collections and answer questions.

In addition to the wealth of information on display from exhibitors, day-long programming will feature preservation workshops and enlightening presenatations.

The USC Libraries serve as the host institution for L.A. as Subject, an alliance of libraries, museums, and other archival and cultural organizations. The relationship complements the USC libraries’ strong regional history collection and is a natural outgrowth of the libraries’ efforts to preserve and expand access to the primary sources of L.A. history.

USC is minutes from downtown Los Angeles and is easily accessible by major freeways and the Metro Expo line. Doheny Library is located in the center of campus, adjacent to Alumni Park and across from Bovard Auditorium, on Trousdale Avenue. For information regarding parking on campus, visit the Parking Services Website. 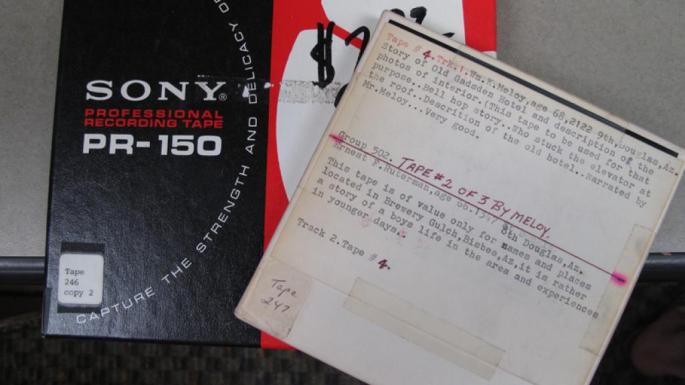 This collection contains a wide variety of interviewees over many years. Interviewees include Arizona pioneers and prominent citizens. As well, histories include narrations by pioneers themselves and discuss how families came to live in certain parts of Arizona. The collection is organized alphabetically by interviewee. It comprised a wide variety of topics and subject matter. A brief overview of subject matter discussed in the oral histories is provided with the individuals name.

Since the 1800’s, American popular culture has been filled with romanticized depictions about the West and the US Mexican border. These stereotypes became conventions in Western novels which typically include plots that portray conflicts between “law abiding” Americans and “blood thirsty” Indians who are typically regarded “savages” and treated as “other”. The Mexican border is typically portrayed as “lawless,” and Mexicans are usually described as dirty “bandidos”. Only American law and justice can bring peace in these works. Hollywood has also perpetuated these myths as evidenced in the abundance of Western films produced throughout the 20th Century the majority of which include stereotyped portrayals of Indians and Mexicans.

Tourism was an important enterprise in the first half of the twentieth century Southwest which also perpetuated a number of myths about the West and the border. In order to attract visitors to places like Tucson, groups such as the Tucson Sunshine Climate Club created promotional materials showing lots of open space, people enjoying the sunshine by a cool, clean swimming pool, and lots of fun “cowboy” like activities, such as horseback riding and cattle drives. Dude ranches, where “real” cowboys worked, were also in abundance and owners and promoters of these businesses, typically portrayed the region as having a mild, sunny climate, with lots of opportunities to engage in a variety of outdoor activities.

Visions of the Borderlands: Myths and Realities is an exhibition inspired by two works published by the University of Arizona Press, Celluloid Pueblo by Jennifer L. Jenkins and Postcards from the Sonora Border by Daniel D. Arreola. There is a reality and a myth of the U.S.–Mexico borderlands, propagated through multiple lenses. Featuring material depicting both reality and myth through photography, posters, pamphlets, and written documentation, this exhibit centers on important areas of enterprise for the Southwest such as photography and film; copper mining; tourism; and cattle ranching. It also expresses issues of discord such as the Mexican Revolution, mining strikes, and immigrant exclusionary legislation of the time.

Join us at the 2020 SOHA Conference @unlvlibraries! Our CFP deadline is Monday, January 6th, 2020. Our theme is "Home(Lands) and Oral Histories of (Re)Vitalization." Our conference will be held March 27-29, 2020 at the Lied Library on the campus of the University of Nevada, Las Vegas (UNLV). Home(Lands) is a timely platform for the conference, as SOHA returns to its institutional home @UNLV. Visit southwestoralhistory.org for more information. #oralhistory #history #historians #southwest #conference #CFP #SOHA2020
The @ohassociation is hosting “Copyright 101” by Jenni Matz with the Television Academy on Thursday the 16th January 3-4 EST, (12-1 PST). Visit the Oral History Archives Interest Group (AIG) webpage for more information: oralhistory.org/oha-archives-interest-group-oha-aig. #oralhistoryassociation #oralhistory #history #historians #oralhistorians #archives #archive #copyright
Happy Holidays! Thank you to our generous SOHA members and donors! We hope you enjoy our SOHA Winter 2019-20 Newsletter available via our website, southwestoralhistory.org Our annual conference will take place March 27-29, 2020 @UNLV. Follow #SOHA2020 conference & news updates on social media with @SWoralhistory! You can register today to ensure your early bird rate. Please see bit.ly/2020panels for sample submissions and to organize a panel. Call for Proposals is due January 6th, 2020. Contact us at soha@unlv.edu for more information. #newsletter #news #SOHA2020 #oralhistory #history #historians #southwest
The Purpose of SOHA is to provide a vehicle for communication among persons, programs, and institutions using oral testimony; to encourage cooperation among its members; to promote standards among oral historians, to foster an understanding of and use of oral history; to provide guidance to projects; to create educational programs and resources; to aid in securing financial funding for members’ projects. Apply for the 2020 SOHA awards for the March 27-29, 2020 conference at University of Nevada, Las Vegas. January 31, 2020. Award Notifications: February 28, 2020. See our Call for Proposals for additional details. Visit www.southwestoralhistory.org/awards.html for more information. #SOHA2020 #LasVegas #oralhistory #history #historians #southwest #grant #scholarship #funding #conference
Dr. Farina King, SOHA 1st VP, teaches oral history methodology at Northeastern State University. She hosted a conversation with Sarah Milligan, Head, Oklahoma Oral History Research Program and Julie Pearson-Little Thunder at Oklahoma State University. View their digital collections here that are hosted by CONTENTdm and Omeka: https://library.okstate.edu/oralhistory/digital/. You will learn about Oklahoma Conservation Heritage, Married for Life, Oklahoma Native Artists, OSU and OK Diverse Sexuality and Gender, Spotlighting Oklahoma, and other collections. Jennifer Keil, SOHA President, provided feedback about her role as a digital historian for her company 70 Degrees. She is working on California community oral history projects for cities, governments, and non-profit organizations. View some of the Orange County interviews with the public library here: ocstories.org. Our discussions about preservation and access emphasized the changes in technologies. We discussed migration to new platforms and #metadata structure like XML files. To learn more about project management and receive workshop training, we encourage you to attend oral history conferences. Sarah is the American Folklore Society, Annual Meeting Local Arrangements Co-Chair (2020) October 13-17, 2020 at the Hyatt Regency Hotel in Tulsa, Oklahoma. Farina and Jennifer are organizing the Southwest Oral History Association meeting March 27-29, 2020 at the University of Nevada, Las Vegas. #SOHA #narratives #conference #SOHA2020 #oralhistory #technology
VOICES - Veterans Storytelling Project @oc_fair. Our next public reading of VOICES will take place on Saturday, May 9, 2020, 7:00pm at Heroes Hall, OC Fair & Event Center! Admission and parking are free. What's YOUR #story? We are calling on veterans to participate in our VOICES: Veterans Storytelling Project, which offers free coaching to vets in compiling and sharing their stories of life before, during and after #military service. #veteransday #history #historians #southwest #CA #California #narrative #preserve #oralhistory
Follow Southwest Oral History Association on WordPress.com